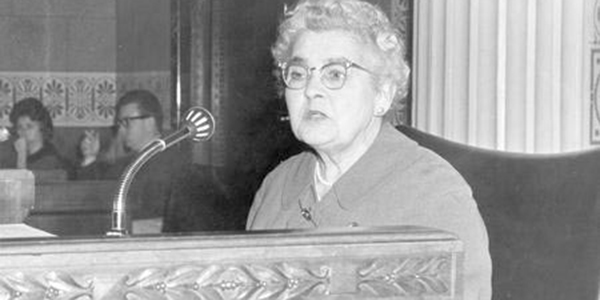 Who was Golda Edmonston?
She was the first female to have ever been president of Columbus City Council. It was in the 1960s, and she was very well thought of. And for a short time. she was an acting mayor of Columbus between two terms, which was unusual for a woman of that time.

What were Golda’s major contributions to Ohio politics?
She served in the House of Representatives in the state government five different times in the 1940s and 1950s. She was a very much an advocate for women having equal rights, equal pay and women being involved in actual government decision making.

I think as a person, one of the things I have heard that she contributed to most is making sure that people who could not go to the polls to vote, like older people or people who were sick or infirmed, that they got absentee ballots so they could still vote, or they could apply to vote even if they couldn’t go to the polls. She felt very strongly that people needed to vote and that women especially needed to have an education in politics if they were going to raise children and that was the basis of how you raised young children.

What influenced her to go into politics?
I don’t know enough about her background to know, except I think she must have been raised in a very strong family. Her great-great-grandfather in the early 1800s was in the Ohio Legislature. So in her history of her family, she had models, even if they were men.

And then it seems as though when she was a young woman, women were getting the vote, and I think she was very inspired as a suffragette. She saw this cause as very important. Prior to women getting to vote, the most active part of the city was right here in the university area, and the wives of professors and others at Ohio State were going out to get people to vote. They would sit at kitchen tables with poor women, very poor women and poor husbands, and they would talk about how important it was for the women to have a vote to help raise salaries of everyone. She would have been part of all of this, and that I’m sure inspired her.

So she really is a role model for many women and still she would have been unusual in that she got married. I don’t think she had children, but she did not ever stop politics. A lot of women would get married and have children and start another life. She never did that. She just kept on going.

Because politics was her life.
I think so, at least being active in making decisions. She was in her 70s when she became president of City Council in the 1960s, and it is an active period of time of Civil Rights in the United States. So she was out there fighting for this.

How do you think people in the past viewed her?
There were a few people after her. One is still alive, by the name of Fran Ryan, who followed Golda on City Council. She would often tell the story that when she was questioned about what a woman knows about these things – “You’re a woman, you don’t know much” – she would say, “Well Golda, it didn’t stop her. She did it.” So she was a model for some other people.

What has been her influence on Columbus’ politics today?
In the 1960s and ’70s and ’80s as an endorsement, Golda is telling people, “Who’s a good candidate” or “she’s a good candidate,” which meant a lot and the word got around. Columbus in a way is a very small town and as soon as she said, “I’m behind this” or “I vote for him” or “I vote for her” people would listen. So she was influential in that sense.

What made Golda unique?
She had her own political strategy, and she was successful. And she was very unafraid, very honest, very forthcoming, and she could get respect from people.

I also have the impression that she spent a lot of her time meeting people so she knew what people were thinking. She knew what the woman in the grocery store was thinking and the man who sold cars, and she wasn’t isolated. She really talked with people, and she could connect with them so I think that’s another factor of her being respected.

So she was willing to talk to people, even those who did not benefit her?
Right. And she wasn’t just looking for political favors. She was looking for their views and their opinions. There were a lot of men who supported her, and they must have seen her as an honest equal and they respected her for that.

Thank you for introducing us to Golda Edmonston.
Oh no, I thank you for asking me and listening to an old woman the age of Golda (laughter).

Notable Women of Columbus: Golda Edmonston" data-count="horizontal" data-via="cbusneighbors">
columbus city council columbus neighborhoods columbus ohio golda edmonston ohio politics wosu
This entry was posted on Wednesday, May 1st, 2019 at 3:46 pm and is filed under Story. You can follow any responses to this entry through the RSS 2.0 feed. Both comments and pings are currently closed.